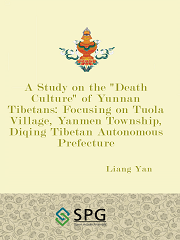 As a multi-ethnic country, China's death culture contains various forms of realistic expression in the cultural ecological environment of ethnic minorities. The funeral ceremony and the concept of death of this culture are all influenced by multi-dimensional and interactive influen- ces in the daily habits of each nation, in the dimension of time and space, and then gradually disassimilated and changed or interpenetrated with other national cultures or even merged in the horizon. Due to the multi- ethnic evolution in the special geographical and historical environment, death culture shows the custom form and cultural structure of the coexistence of heterogeneity/homogeneity in its media ecological envir- onment. In the whole cultural circle of China, the rich ethnic cultures, such as the unique Tibetan culture of death, do not conflict with the development of western deathology. The death culture of the Tibetan permeates into the Chinese traditional culture circle with great vigor, which not only becomes a cultural phenomenon with difference, but also forms the same cultural structure with the death culture of other nationalities. The death culture of the Tibetan people not only has the micro concept of ecological balance, but also shows the macro media ecological system. Relying on the potential and dominant forms of cultural system to carry out cultural infiltration and communication and local habits blend, the cultural system of the Tibetan ethnic group is visible and invisible together, showing a kind of condensed rule of death. Death culture factors form the environmental field, and the vertical and horizontal structure in the field constructs the origin of death culture.